Other highlights include the premiere of People Puzzler– a new game show airing on Game Show Network that comes straight from the pages of People magazine, The Escapists, a new reality series airing on Amazon Prime Video and Salt-N-Pepa, a new biopic from Lifetime that looks back on the life and career of the very popular all-female Hip-Hop group from the 80s.   Also, To Tell The Truth returns with an all new season.

All American – SEASON 3 PREMIERE (Showcase and The CW @ 8pm ET)

WALKER – SERIES PREMIERE (The CW @ 8pm ET)
A re-imagining of the long-running series “Walker, Texas Ranger”, “Walker” follows the adventures of Cordell Walker (Jared Padalecki), a widower and father of two with his own moral code, as he returns home to Austin after being under cover for two years, only to discover there’s harder work to be done at home. He must attempt to reconnect with his creative and thoughtful son and his headstrong, somewhat rebellious teenage daughter and navigate clashes with his family — an ADA brother who stepped in during Walker’s absence, his perceptive mother and his traditional rancher father. 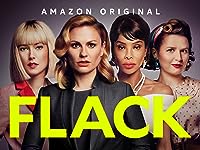 FLACK – SERIES PREMIERE (Amazon Prime Video)
Bad Behavior. Great Publicists. Ever wonder what the real story is behind those celebrity gossip columns? Flack has all the dirt. Four quick-witted and relentless flackers led by Robyn, played by Academy Award Winner Anna Paquin, are tasked to make the best of their celebrity client’s terrible decisions.

SALT-N-PEPA – MOVIE PREMIERE (Lifetime Canada @ 8pm ET)
The journey of Queensborough Community College students Cheryl “Salt” James and Sandra “Pepa” Denton as they enter the world of rap and hip-hop after recording a song for their friend Hurby Azor.

RESIDENT ALIEN – SERIES PREMIERE (CTV Sci-Fi Channel @ 10pm ET)
An alien crashes on Earth and hides in a remote Colorado mountain town; after assuming the identity of the town doctor, his nefarious mission is threatened when he realizes one of the townspeople, a 9-year-old boy, can see his true alien form.

THE GREAT ESCAPISTS – SERIES PREMIERE (Amazon Prime Video)
The Great Escapists is the story of Hammond (The Grand Tour) and Belleci (Mythbusters), two of pop-science TV’s greatest minds, with nothing but their smarts and their scrap shipwreck for survival. Can they invent themselves off the island? Or will they be castaway forever? This is the engineering challenge of their lives, will they succeed and become The Great Escapists?