The 2020 Edition of our FALL TV PREVIEW section has now launched!
Home Canadian Channels Space Lights Up the New Year with a Jam-Packed Schedule Featuring STAR TREK: DISCOVERY, DOCTOR WHO, DEADLY CLASS, and STAN AGAINST EVIL

Space Lights Up the New Year with a Jam-Packed Schedule Featuring STAR TREK: DISCOVERY, DOCTOR WHO, DEADLY CLASS, and STAN AGAINST EVIL

But first, January on Space kicks off as the TARDIS lands on January 1 for the brand-new DOCTOR WHO New Year’s Day special at 8 p.m. ET.

Then, Space enrolls in the bloody-good series, DEADLY CLASS beginning Wednesday, Jan. 16 at 10 p.m. ET. Executive produced by the Russo Brothers (Avengers: Infinity War) and based on the smash-hit Deadly Class graphic novel series, at this elite private school, survival is an extra credit.

Finally, STAN AGAINST EVIL brings the undead back as Season 3 of the horror comedy series premieres with back-to-back episodes, Thursday, Jan. 17 at 10 p.m. ET.

After answering a distress signal from the U.S.S. Enterprise, season two of STAR TREK: DISCOVERY finds the crew of the U.S.S. Discovery joining forces with Captain Christopher Pike on a new mission to investigate seven mysterious red signals and the appearance of an unknown being called the Red Angel. While the crew must work together to unravel their meaning and origin, Commander Michael Burnham (Sonequa Martin-Green) is forced to face her past with the return of her estranged brother, Spock.

As the series continues to break from tradition, the TARDIS touches down for the brand-new DOCTOR WHO New Year’s Day special, Tuesday, Jan. 1 at 8 p.m. ET. In “Resolution,” as the New Year begins, a terrifying evil is stirring, from across the centuries of Earth’s history. As the Doctor (Jodie Whittaker), Ryan (Tosin Cole), Graham (Bradley Walsh) and Yaz (Mandip Gill) return home, will they be able to overcome the threat to planet Earth?

Leading up to the premiere of the festive special, Space airs the NEW YEAR, NEW DOCTOR marathon, giving viewers the chance to catch up on Jodie Whittaker’s first season as the traveling Time Lord, beginning 9 a.m. ET on January 1.

DOCTOR WHO is produced by BBC Studios.

Based on the hugely popular graphic novel series of the same name, executive produced by the Russo Brothers (Avengers: Infinity War), and featuring breakout star Lana Condor (To All The Boys I’ve Loved Before), the 10-episodes, hour-long series is set in a bleak and ominous world against the backdrop of late ’80s counterculture and teen angst.

DEADLY CLASS follows Marcus (Benjamin Wadsworth, TEEN WOLF) a homeless teen recruited into King’s Dominion, a storied elite private school where the students are the children of the world’s most feared crime bosses. Under the leadership of Master Lin (Benedict Wong, Doctor Strange), Marcus is forced to maintain his moral code while surviving a ruthless curriculum, which includes hand to hand combat and poisons, all while navigating vicious social cliques, and facing his own adolescent uncertainties. The series also stars Lana Condor, Maria Gabriela de Faria (YO SOY FRANKY), Luke Tennie (Shock and Awe), Liam James (THE KILLING) and Michel Duval (QUEEN OF THE SOUTH). 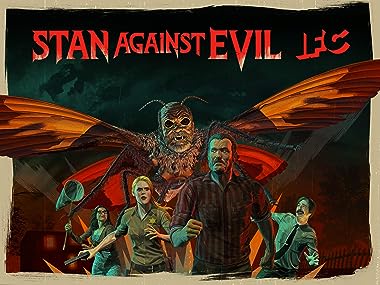 STAN AGAINST EVIL follows Stan Miller (John C. McGinley, SCRUBS) a perpetually disgruntled former sheriff of a small New England town who was forced into retirement. Stan has trouble relinquishing his authority to Evie Barret (Janet Varney, YOU’RE THE WORST) the tough and beautiful new sheriff in town, but they form an unlikely alliance when both begin to realize things are not quite right in their quaint New England town.

The third season of the horror comedy series picks up right after the Season 2 finale, with Stan and Evie dealing with the consequences of Stan traveling through time to save his dead wife Claire. In doing so, he inadvertently opened a portal between the Land of the Living and the Land of the Dead, allowing evil forces to truly take over the town and even some of its inhabitants. Although always the skeptic at first, Stan must work with Evie to once more save the town – even if it means making a literal deal with the devil.

In the Season 3 premiere, “Hell Is What Your Make It” (Thursday, Jan. 17 at 10 p.m. ET), Evie is arrested for murder and committed to a psychiatric hospital. Stan attempts to rescue her, but everyone thinks he’s a demon. There may be a new way to free the souls cursed by Constable Eccles (Randall Newsome, TURN: WASHINGTON’S SPIES). Then, in “The Hex Files” (Thursday, Jan. 17 at 10:30 p.m. ET), two eerily familiar paranormal investigators arrive to investigate the Black Hat Society. Stan searches for a bigger evil ally that could help defeat Constable Eccles.