It looks like we are setting into a pattern as this week looks similar to last week- more network series winter premieres, more new series premieres and yet another awards show! A few series say good-bye this week as they conclude their current seasons, they include Kids Say the Darndest Things, Perfect Harmony and Ray Donovan.  New premieres this week include 9-1-1 spin-off 9-1-1: Lonestar, new Sci-fi comedy Avenue 5 from HBO, horror drama October Faction on Netflix and the much anticipated Star Trek: Picard, which marks the return of captain Jean-Luc Picard on CTV Sci-Fi Channel & Crave.   In addition, new seasons of Chilling Adventures of Sabrina, Curb Your Enthusiasm, Project Blue Book, Station 19 and The Bold Type premiere this week.

Other highlights include the 26th Annual Screen Actors Guild Awards, airing Sunday @ 8pm ET on Global as well as NHL All-Star weekend, which kicks off with the Skills Competition (Friday @ 7:30pm ET) followed by the All-Star Game itself, airing Saturday @ 8pm ET on CBC, NBC & Sportsnet.

9-1-1: LONESTAR – SERIES PREMIERE (CTV and FOX @ 10pm ET)
9-1-1: Lone Star follows a sophisticated New York cop who, along with his son, re-locates to Austin, and must try to balance saving those who are at their most vulnerable with solving the problems in his own life. 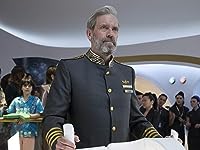 AVENUE 5 – SERIES PREMIERE (HBO @ 10pm ET)
Set 40 years in the future, Avenue 5 follows the captain and crew of a luxury space cruise ship as they navigate disgruntled passengers and unexpected events after experiencing technical difficulties onboard.

OCTOBER FACTION – SERIES PREMIERE (Netflix)
The family drama gets downright monstrous as parents Fred and Deloris hunt the supernatural, and twins Viv and Geoff harbor their own strange secrets.

OUTMATCHED – SERIES PREMIERE (CTV2 and FOX @ 8:30pm ET)
A family comedy about a blue-collar couple in South Jersey trying to get by and raise four kids, three of whom just happen to be certified geniuses.

The World According to Jeff Goldblum – SEASON 1 FINALE (Disney+)