Global is cranking up the heat this winter with a red-hot lineup of new and noteworthy premieres and established returning hits, including the premiere of Dwayne Johnson’s larger-than-life competition series The Titan Games and new comedy spinoff series Schooled. Following a successful fall season that drew a 15% increase to its overall audience*, Global delivers new episodes of #1 new drama New Amsterdam and Top 20 series FBI* on Tuesday nights, and the return of crime thriller The Blacklist, family comedy Man With A Plan, and the most-watched entertainment series during the 2018 Olympics, Big Brother: Celebrity**. 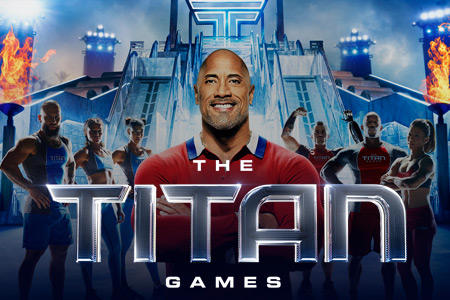 Powering up the schedule this winter is The Titan Games, the ultimate athletic competition series inspired and designed by Dwayne Johnson, set to debut with a special two-hour premiere on Thursday, January 3 at 8 p.m. ET/PT. Executive produced and hosted by Johnson, the 10-episode series offers everyday people the chance to shatter expectations, unlock their potential, and rise to the challenge in epic head-to-head challenges designed to test the mind, body, and heart. Competitors include a police officer, an accountant, a farmer, and debt collector, battling it out until one male and one female conquer Mt. Olympus culminating in a grand prize winner.

Viewers are in for a dose of laughter this winter during the premiere of Schooled, a new comedy series and spinoff of The Goldbergs, airing Thursday, January 10 at 9 p.m. ET/PT. From creators Adam F. Goldberg and Marc Firek, the series is set in 1990-something and follows the hilarious faculty of William Penn Academy led by a group of teachers that will leave viewers feeling inspired and nostalgic all while enjoying a good laugh.

Familiar faces return to Global with Red (James Spader) and Liz (Megan Boone) in the two-night, season six premiere of The Blacklist on Friday, January 4 at 10 p.m. ET/PT and Sunday, January 6 at 8 p.m. ET/PT. For an advanced sneak peek of part-two of the exciting premiere, viewers can visit GlobalTV.com as of Saturday, January 5 for an exclusive early digital release. In preparation of The Blacklist’s return, click here to catch up on the series. Also returning to Global with more laugh-out-loud moments with Adam (Matt LeBlanc) and family is the season three premiere of Man With A Plan on Monday, February 4 at 8:30 p.m. ET/PT.

What happens when one of TV’s wildest reality series meets Hollywood? Roll out the red carpet and let the ruckus begin with the season two premiere of Big Brother: Celebrity on Monday, January 21 at 8 p.m. ET/PT. Hosted by Julie Chen Moonves, the hit reality series returns with dazzling celebrities and over-the-top drama for 13-episodes airing multiple nights over the course of three weeks, before a winner is crowned on Wednesday, February 13. Big Brother: Celebrity’s all-star cast will be announced in the New Year.

Viewers can watch all their favourite episodes from Global’s full lineup on GlobalTV.com, Global GO (available for Apple TV, Google Chromecast, and Amazon Fire TV Stick), and on demand. Additionally, all shows are available to watch live on GlobalTV.com and Global GO by simply signing in with their TV service provider credentials.

All times are ET and subject to change. New seasons joining the winter lineup are bolded.

8:30 p.m. – Happy Together (first of the final two episodes of the season)

Transplant (CTV) has been renewed for a Second season.

The Great North (FOX) has been renewed for a Second season before it even premieres. The Series premieres Mid-season 2021.

The Sinner (USA Network / Showcase) has been renewed for a Fourth season.

Hightown (Starz) has been renewed for a Second season.

BlackAF (Netflix) has been renewed for a Second season.

Cobra Kai (YouTube Premium) will be moving to Netflix. Seasons 1 & 2 will air some time this year, while a 3rd season is in development.